We LOVED our trip to Texas. If you want to Travel Texas like my family of 5 did, come on in, grab a drink and check out ALL the fabulous places to visit in Austin Texas and beyond 😉

It’s been a dream of mine to load the family up and head to Texas. It was a even bigger dream to partner with local Texas restaurants and businesses and bring it all back to YOU for one honest BIG honest review. I mean everything is BIGGER in Texas, so why not, right?!? Let’s get started! 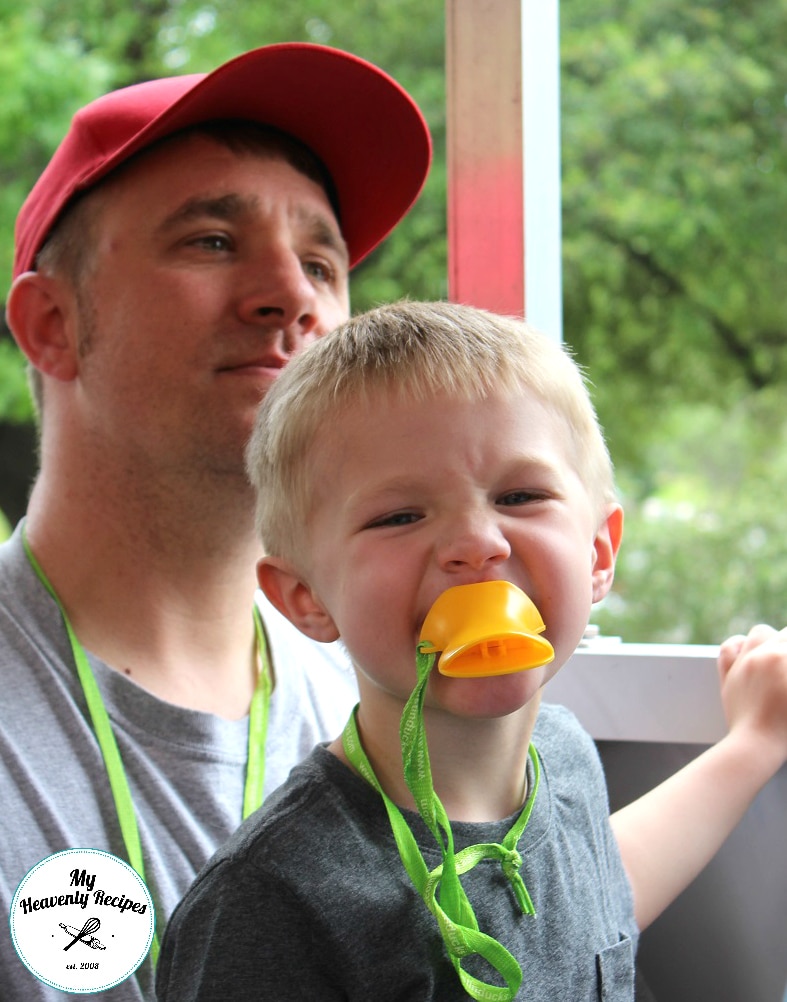 We arrived in Austin, grabbed our rental car and headed straight to Austin Duck Adventures. If you live in or around Austin and have never done this tour, you MUST! We learned so much valuable information and was also able to tour parts of the city that we simply didn’t have time for!

A few things we learned on this tour were:

We then headed to the hotel at Hampton Inn & Suites on Lavaca St. to unpack and chill out for a bit. We did head to the hotel pool and the kids were disappointed that it was “so freezing” so we had to wait to go swimming until we headed to Waco! Once we were rested the family headed down to the Austin Taco Project. You may have seen me post about it on Instagram:

English Garden Party is AMAZING!!! I could hang out at @austintacoproject all day long! #traveltexas #loehnerstaketexas

Now. I will be honest. The prices of the tacos were a little on the high side. BUT, they were pretty darn good! The Poutine was TO DIE FOR. Like I am actually craving it now that I’m thinking about it. And my Southwestern Grilled Corn Mix recipe was inspired by the Austin Taco Project’s MXN Street Corn. It too was something we never had and has quickly became a staple in our home! 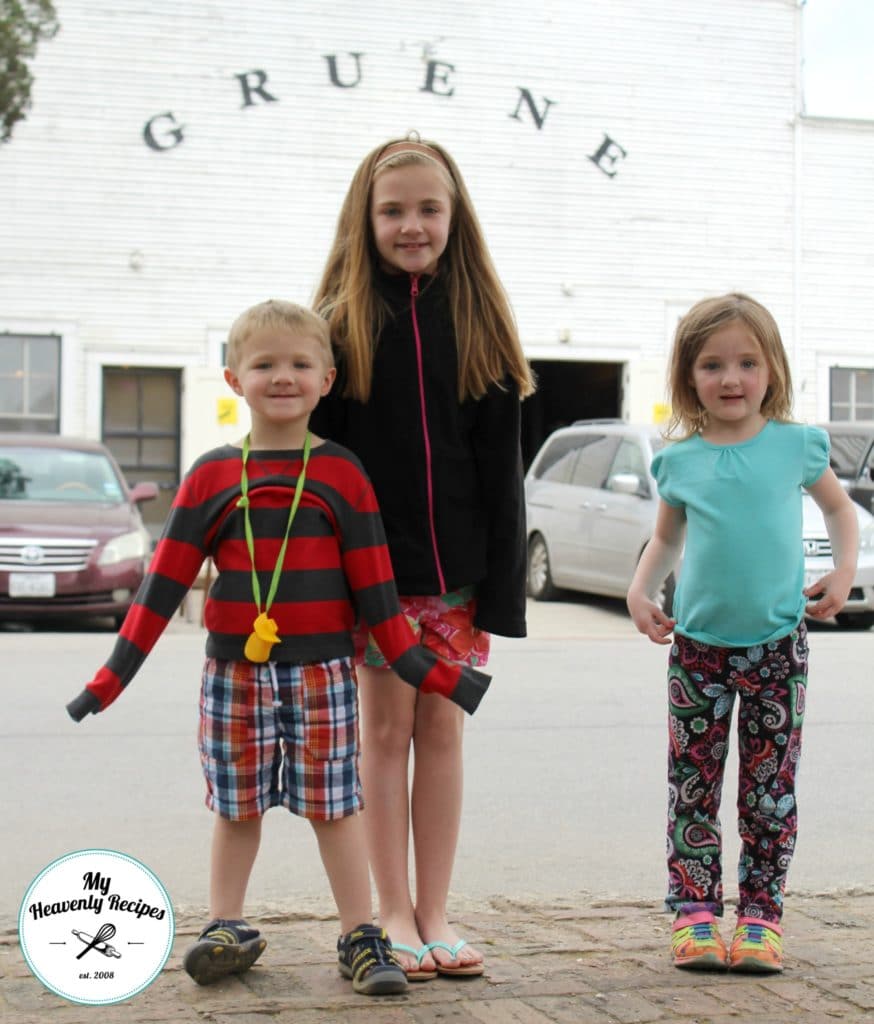 The following morning we headed out on an Adventure. We drove about 30 minutes south of Austin to the historic town on Gruene, Texas. It is a super cute little town that is passionate about music. The Gruene Hall is the oldest dance hall in Texas. We were told that many country performers will just show up and play free shows! The week before we arrived Leann Rimes made an appearance!

The hall was JAM packed full of folks on a Sunday morning for church service. So we ended up walking around and exploring! From wine tastings, to quaint little shops to a nursery and restaurants you could literally spend all day in Gruene. 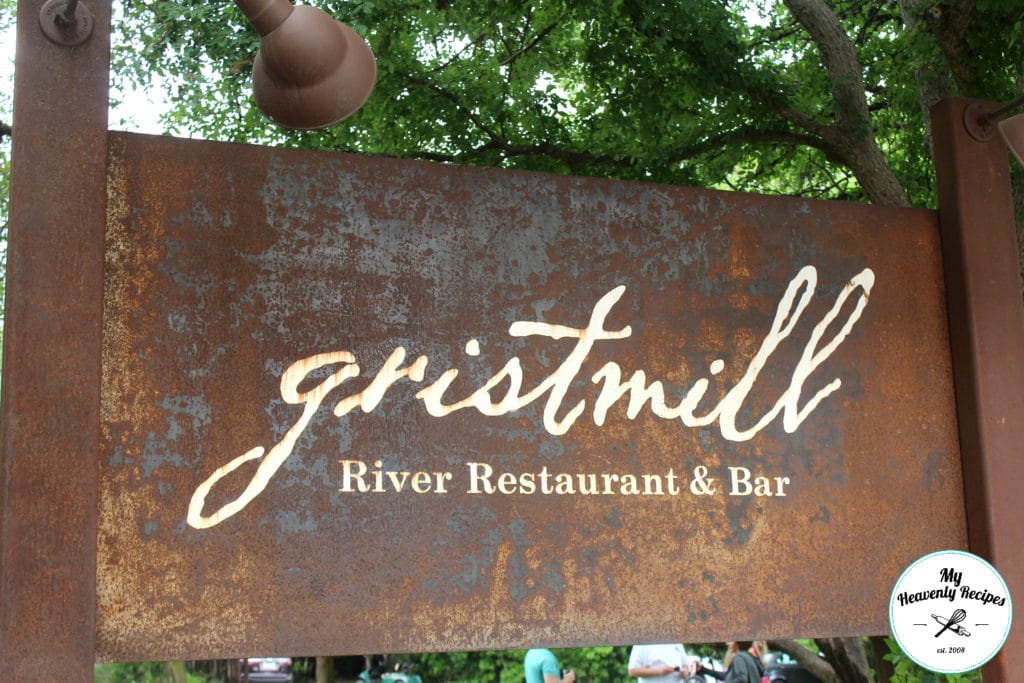 We headed over for lunch at the Gristmill Restaurant. I must say, you have got to visit this place. It’s one of those places that I will go to everytime I’m around the area! From delicious chicken fried steak, to fall off the bone ribs, to fresh shrimp with a gorgeous view you can’t go wrong. Plus, any restaurant that prides itself with fresh ingredients is for ME!

We ate A LOT of YUMMY food at the Gristmill. The first day that we were home I created my version of their Grilled Honey Chicken Breast. I can’t say enough about the Gristmill. Seriously. I didn’t want to leave! In fact, I didn’t leave! We had a drink, enjoyed the weather, the scenery and even asked the manager for a tour of the historic facility. I was AMAZED at the size of the restaurant itself. Sitting down on the balcony, I would’ve never imagined it could seat up to 1,100 customers at once! I just want to go back to the Gristmill right NOW! 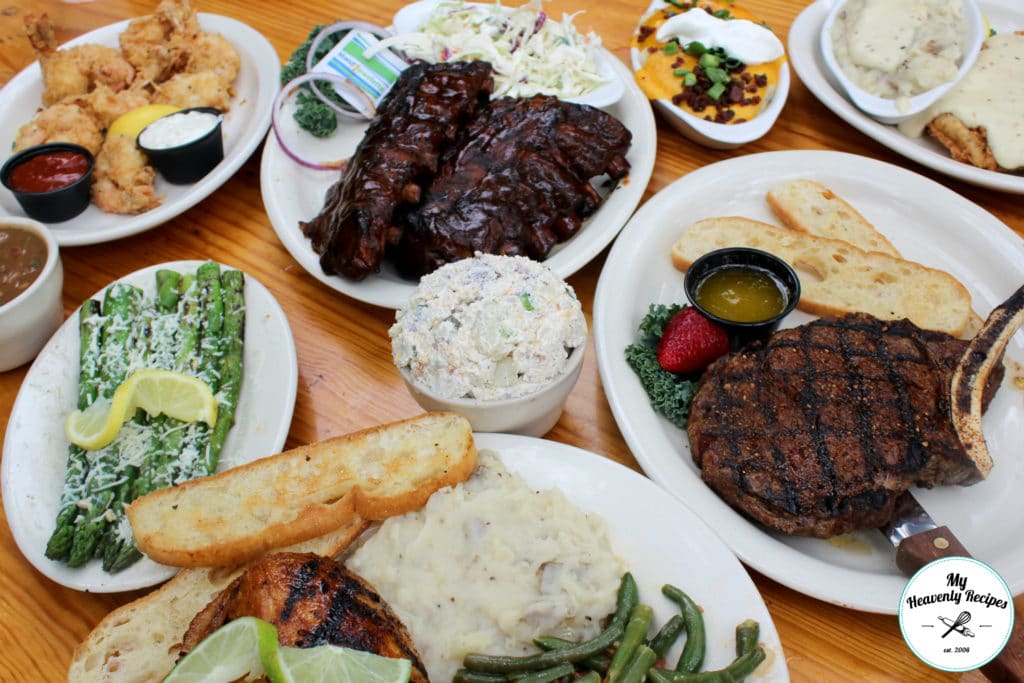 Don’t you just want to lick your screen right now? OMG, I’m so hungry!!! Oh and I forgot to tell ya about the Cold Potato Salad. Yup, that’s another recipe that I’ve recreated in my kitchen since we’ve been back! 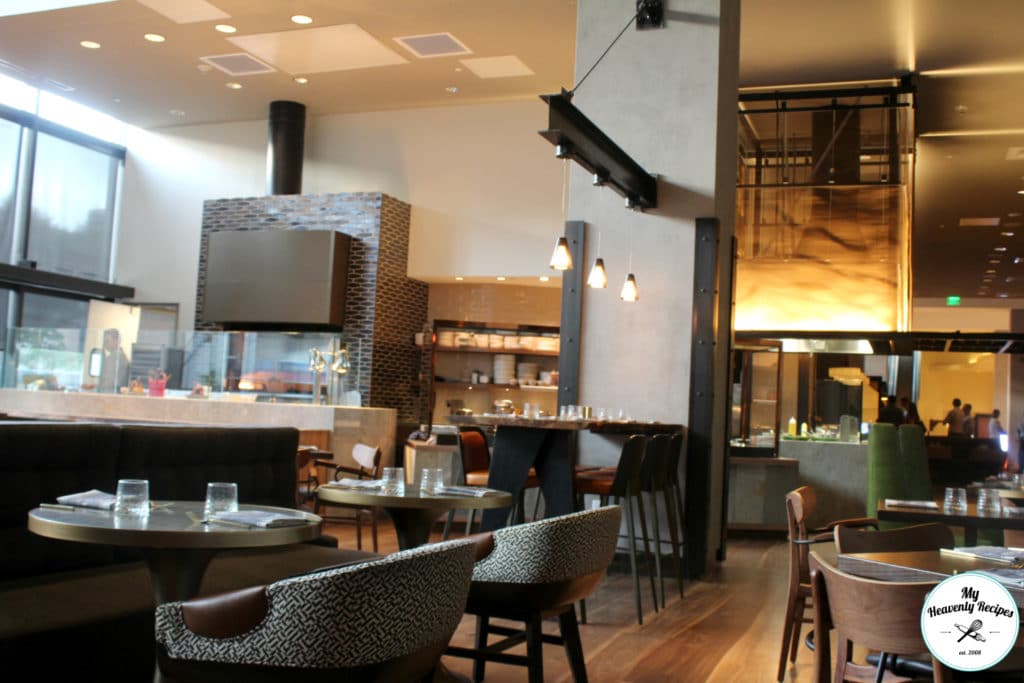 Later that night, after we recovered from our food coma, we headed back into downtown Austin and hit up the Cannon + Belle restaurant. It’s located inside the Hilton, right next to the Austin Taco Project. It was a little weird to get into the restaurant as you had to head into the hotel and upstairs, but, after that we were ready to eat! The restaurant was super modern and empty on a Sunday night.

After speaking with the restaurant manager Caitlin and Chef Mike we started realizing how hit or miss business can be when you are a restaurant that’s attached to a hotel, but, not apart of the hotel. So for that and the weird access to get into the restaurant, it’s been a little less than an impressive opening. The restaurant opened in November 2016 and I love the fact that they are truly a “farm to table” restaurant. They take pride in obtaining ingredients from central Texas and using what is in season.

Now, it was dark in the restaurant, so taking images of the delicious food was anything but easy, so bare with me on the following: 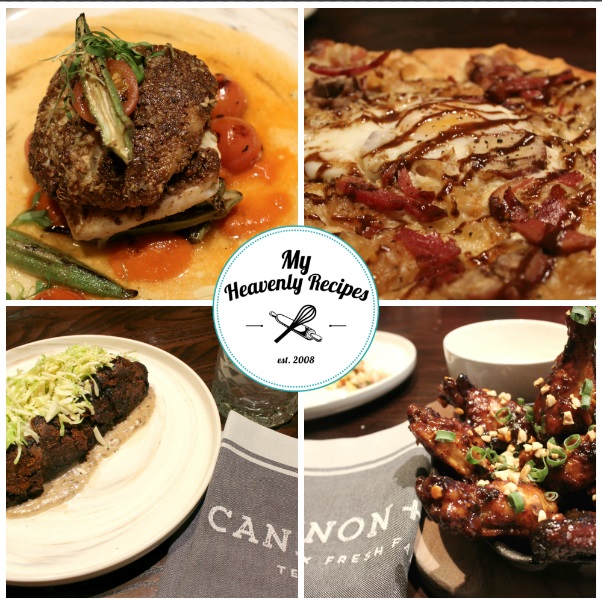 We got to try A LOT of items that I would’ve NEVER ordered and I’m so glad that we did. I got to try some amazing flavors and the kids LOVED the Bird Pizza! The farm fresh recipes we got to enjoy while at Cannon + Belle included the Shrimp Tamale, Grilled Chicken Wings, Texas Greens, Bird Pizza, Seed Crusted Snapper, Pastrami Cured Beef Rib, and Buttermilk Pie. I’ve never had snapper, but, I LOVED it. Now, I need Chef Mike to send me the seeds from Texas to crust the snapper in and I’ll be one happy camper!

After that the kids were pretty much whipped. Jas and I drove around town a bit while the kids fell asleep 5 minutes after leaving the restaurant. The Downtown area of Austin was like Nashville on steroids. There was music, alcohol and people from all walks of life EVERYWHERE! It was a pretty cool site to see and my camera battery was dead!

Oh and if you are in Austin, you’ve got to hit up Congress Ave. BEFORE 9 pm and stand on the bridge. From March to November there’s MILLIONS of bats that fly out at night to feast! Yes, those black bats that fly in the sky. They eat all the mosquitos and the reason why you won’t get nibbled on while in town! Isn’t that cool?!? 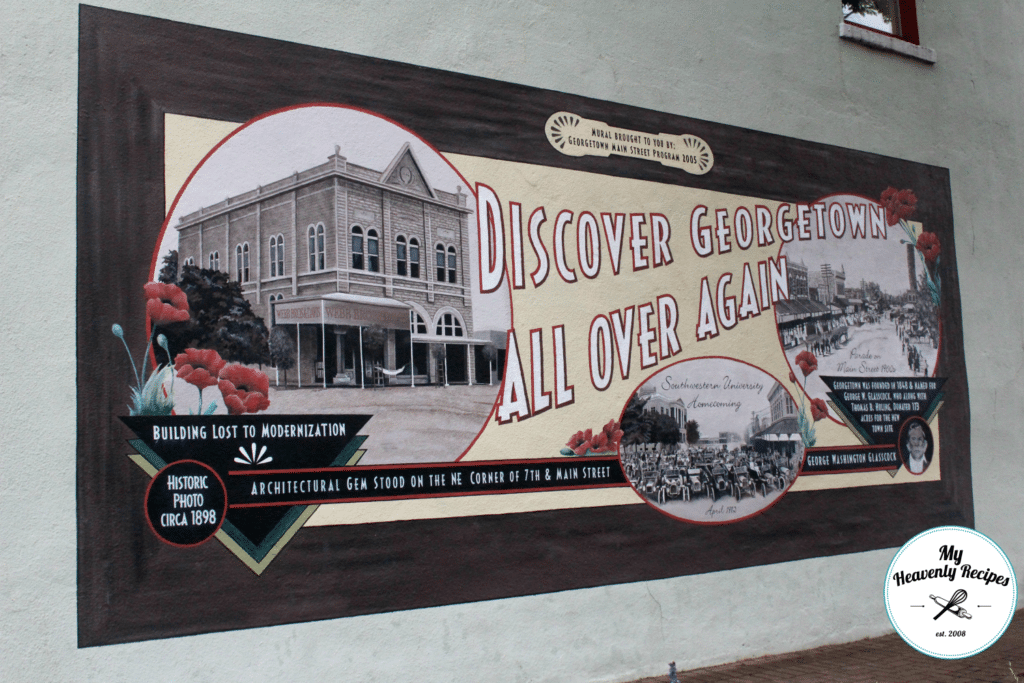 Next up on our agenda was Georgetown, Texas. It was about a 30 minute drive north of Austin and such a super cute quaint historic town. The Mayor’s Wife, Mickie, met us for a private tour. While walking around I believe I counted 33 building that are still standing from being built in the late 1800’s. The town was simply stunning, full of history and very friendly. The town ALWAYS has something going on. Whether you looking for something to keep the kids busy to listening to music on the steps of the Courthouse there’s a lot of inexpensive entertainment. 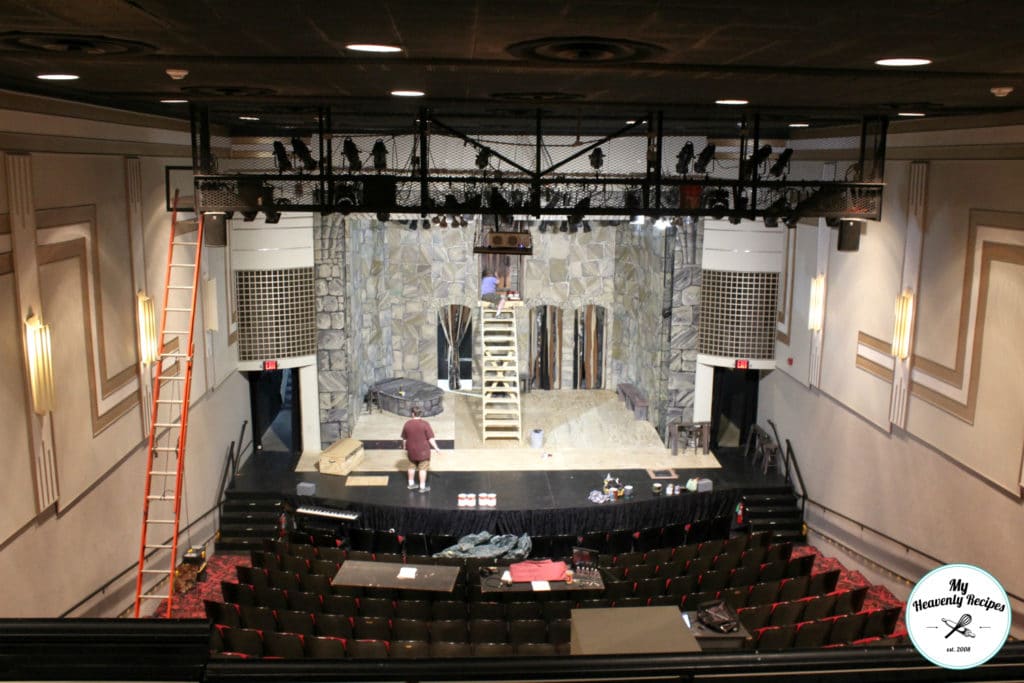 Speaking of entertainment, we got to also tour Georgetown Palace Theatre. In 1925 the theatre housed a movie theatre. Over the years it’s mission has changed. The building underwent a major renovation, but, has still kept that retro feel from the late 20’s. When you walk through the doors you can just feel something that’s simply magical.

Apparently I was in awe of the town, because, I didn’t take one picture of the buildings 🙁 I’m a sucker for taking in history and pretty old buildings!

After our tour, we stopped in a few of the shops. The kids enjoyed some yummy sweet treats from Serendipity. It started pouring down raining so we headed to our rental vehicle and drove around town a bit to explore some more. 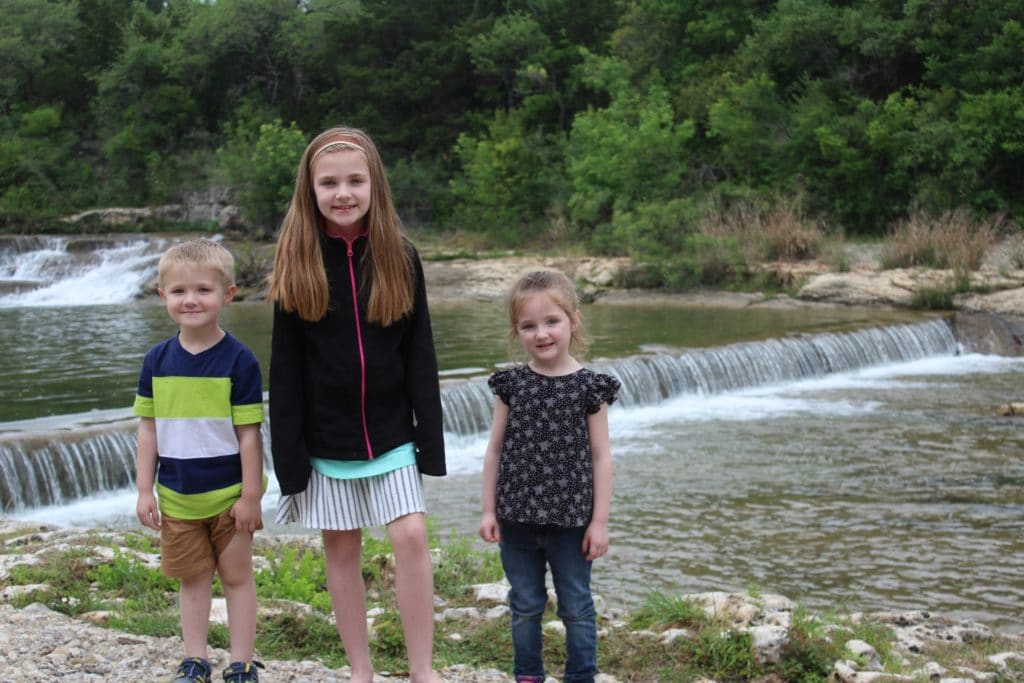 We found Blue Hole Park and thankfully it had stopped raining long enough to take some super cool pictures of the kiddos. The kids crashed on our way back to the hotel to chill for a little bit. We were all able to take a much needed nap before we headed to Rainey Street to enjoy the deliciousness that Banger’s had to offer! 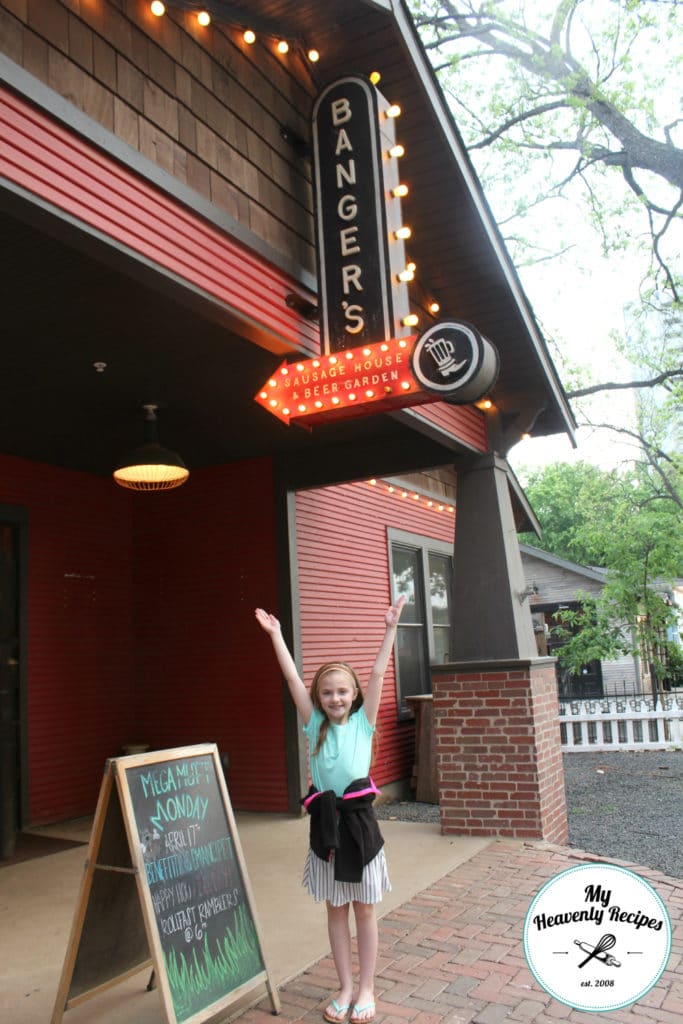 Now, I was a little disappointed when we got to Rainey Street. This is where we should’ve been the entire time we were in Austin! It’s a street filled with food trucks. You see, the food truck thing is just starting to hit here in Cincinnati. Jas and I both enjoy supporting local businesses and trying new foods. Have you noticed how food trucks have a huge following? Like, some of these food trucks have Twitter accounts set up to announce where they are going to be that day. These are the places to track down, but, in Austin, you’ll find them on Rainey Street! 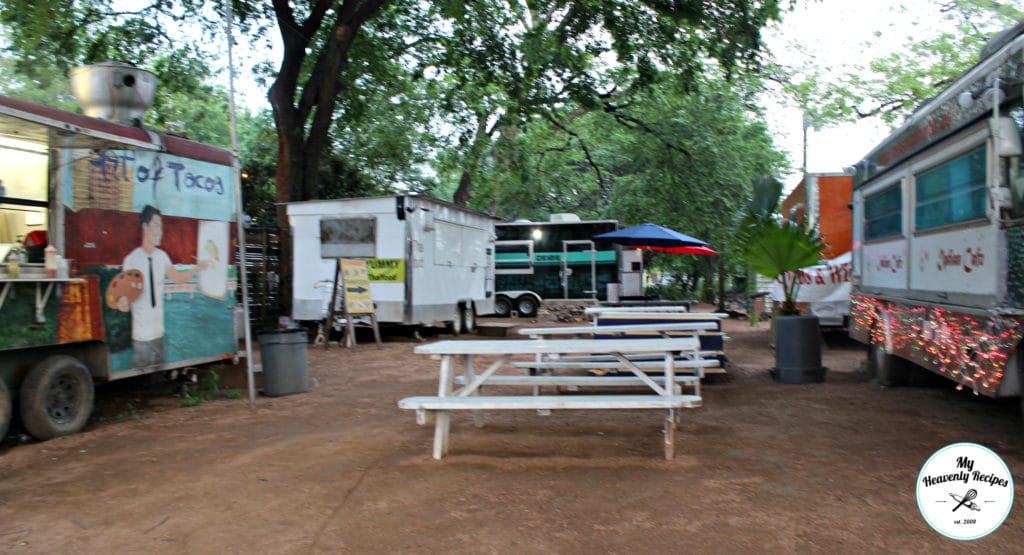 Needless to say, when we come back, we are hitting up Rainey Street FIRST!

Anyhow, Bangers was pretty good. It wasn’t what I was expecting at all. The outdoor patio is perfect for the kiddos to burn off some steam. However, the night we visited it was closed as it was rented for a private party. But, whatevs. We still ate some good food and the kids were impressed with their dessert 😉

After we got our bellies full we drove around and parked to see the bats fly outta the bridge on Congress Ave. We didn’t get there early enough to secure a spot on the top of the bridge, but, none the less, it was still pretty freakin’ awesome {and creepy!}. At least we can say we were there to see those bats!

On our way out of Austin, we stopped in at a legit BBQ joint in Pflugerville. It just so happens that I have some friends from Cincinnati that moved to the area a few years ago and it came HIGHLY suggested that we stop in on our way to Waco. So we did and we are constantly thinking about this joint called Brotherton’s Black Iron BBQ. There’s the BBQ dude, John, and the culinary dude, Marv{in}. And let me tell you something. These dudes are doing BBQ right. 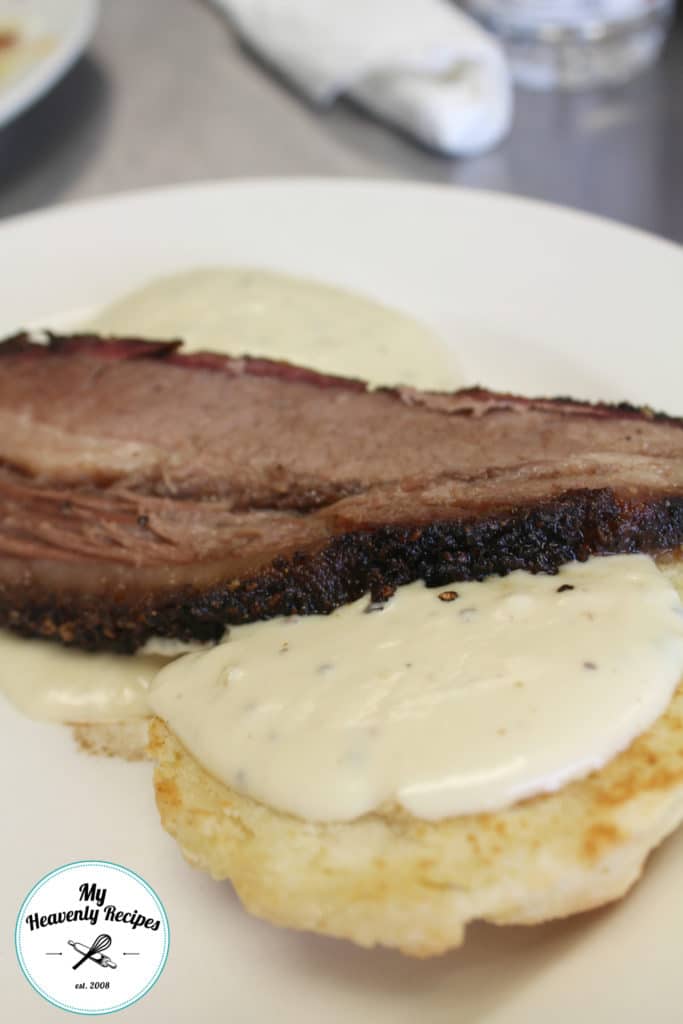 Do you see the bark on that brisket? OMG. Seriously ya’ll. Stop what you are doing right now, go and buy a plane ticket to Austin Texas and take the 20 minute drive north for this deliciousness. It’s seriously worth every penny! And if you are in or near Austin, you’ve got to GO. Just GO already!

Next stop, is Waco, Texas! But, you’ve got to stay tuned….