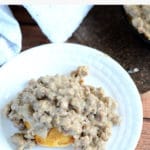 A Biscuits and Gravy recipe that is going to become a staple in your home! My kids ask for this warm and delicious breakfast recipe often. Whether you decide to use canned or homemade biscuits, you simply can’t go wrong. Double the recipe and serve a crowd for brunch on a budget and you can also freeze the sausage gravy for busy mornings.

Be sure to head over and print my Heavenly Biscuits Recipe for a homemade breakfast! 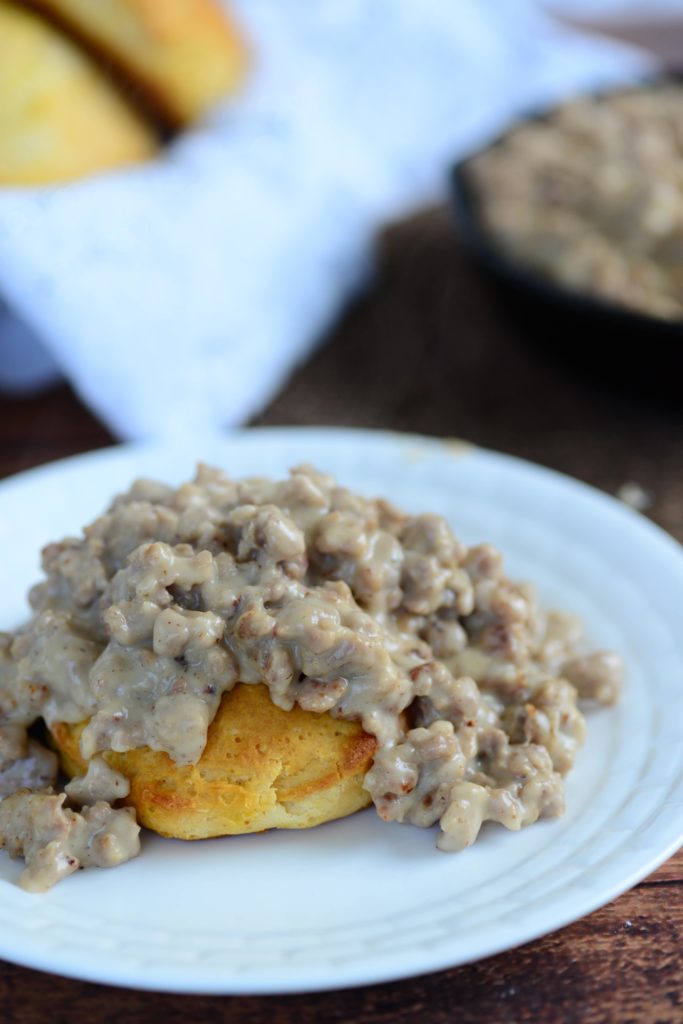 Growing up in a family of 6 meals were served that were often inexpensive to make and enough to feed a small army. Chances were my 3 younger brothers would devour two plate fulls of whatever was being served by the time I even thought about finishing my first plate.

I quickly learned as I became a teen that I needed to hide things. You see my brothers would take or eat anything that they found. During holidays where we received candy I often hid them in different hiding spots throughout my room so that I would actually enjoy a few pieces before they got swiped.

My Mom’s biscuits and gravy was one of those recipes that was literally licked clean. If my bro’s could’ve licked the skillet I’m sure they would’ve. Throughout my adult years I’ve never been able to get the flour/milk mixture right. When I had a wild hair to attempt the biscuit and recipe I’d call my Mom and she’d say “just mix milk and flour”. Well when you’ve been making biscuits and gravy for I don’t know 40 something years you can pull that shit off…me, not so much! 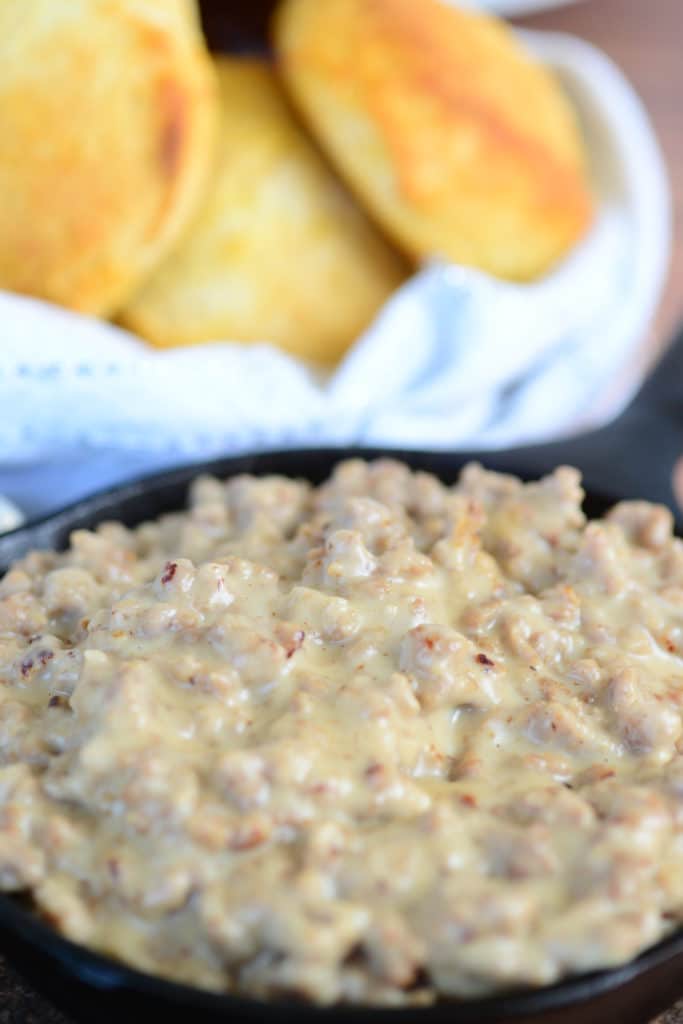 It was more times than I care to admit of throwing out the sausage and gravy before the biscuits were even done baking. I’ve tried my hand at it several times these past few years and just got pissed each and every time.

However, I’ve now perfected my own biscuits and gravy recipe. My little TT LOVES biscuits and gravy from McDonald’s. I only allow the kids to eat McDonald’s for breakfast and that had become her treat. Well, now that Bubby is a bit older and able to put away food like it’s his job, Momma has got to cook breakfast to save the pennies {hey, these kids are EXPENSIVE, mmmmk?!?}.

What You Need To Make Homemade Biscuits and Gravy

How to Make Biscuits and Gravy – Step by Step

You won’t go back to your favorite restaurant to grab Biscuits and Gravy when you see how easy it is to make at home! 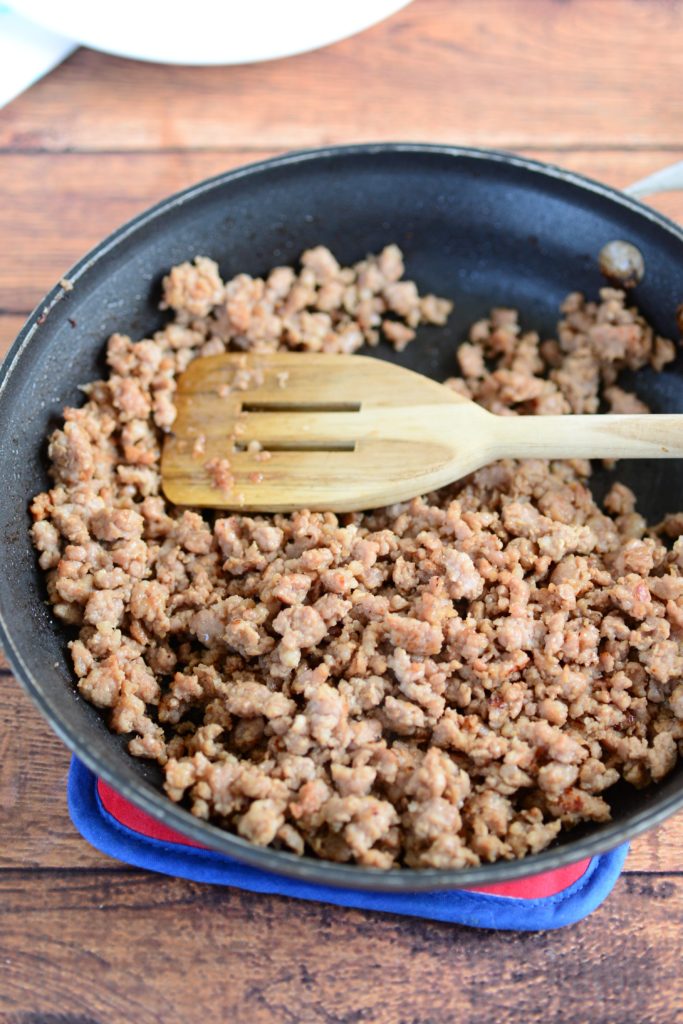 In a large skillet brown the sausage. 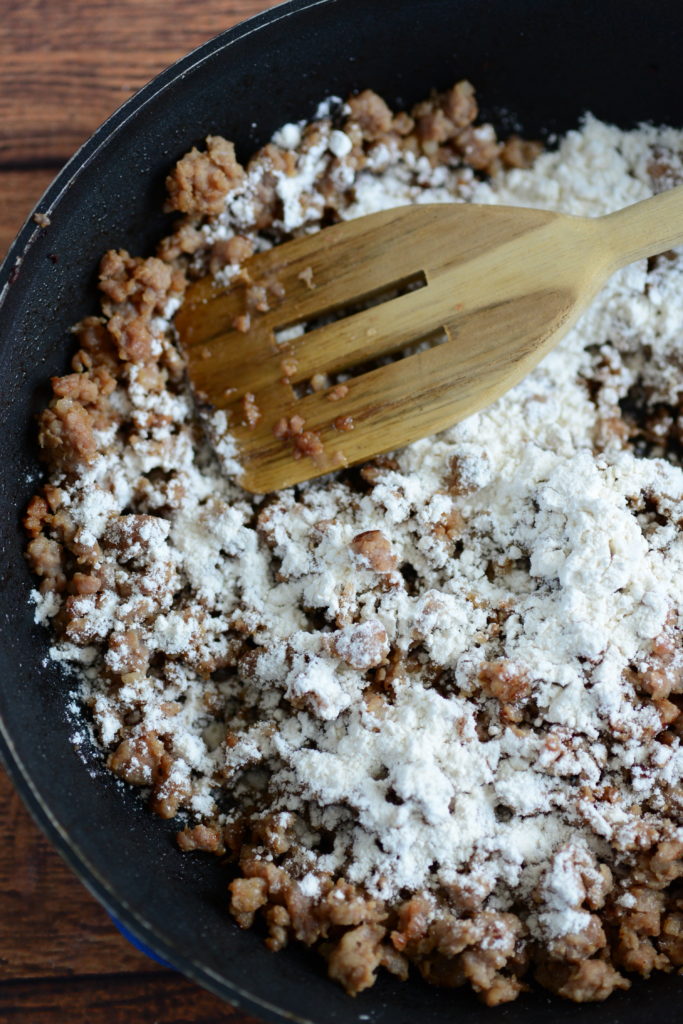 Once sausage has cooked completely, add flour over the sausage. 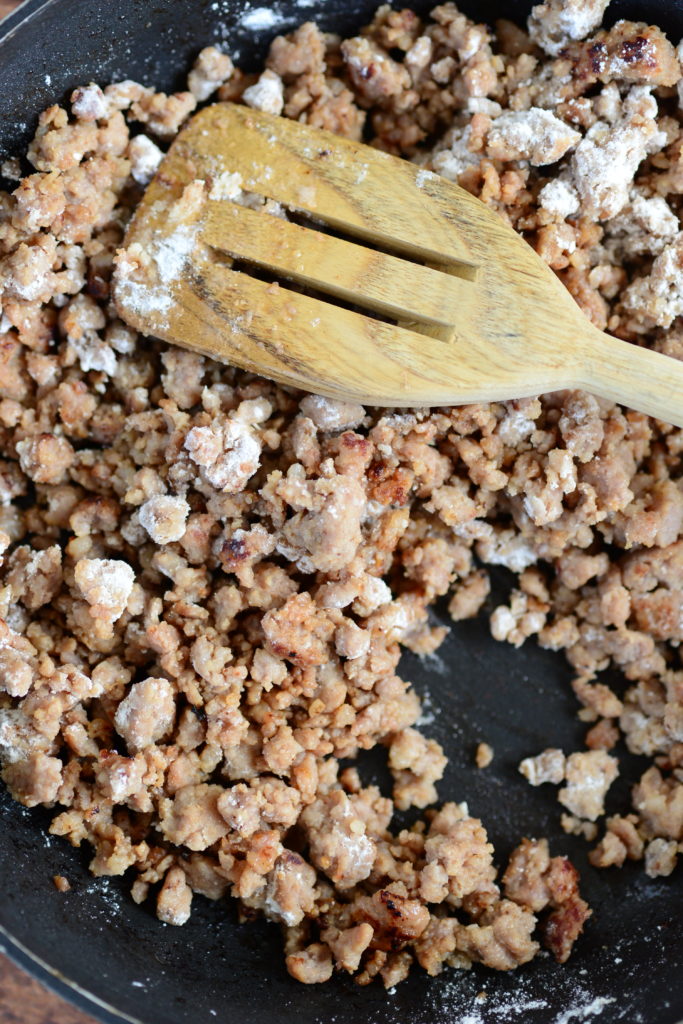 The sausage will look dry and the flour will absorb, this is totally normal! Stir. 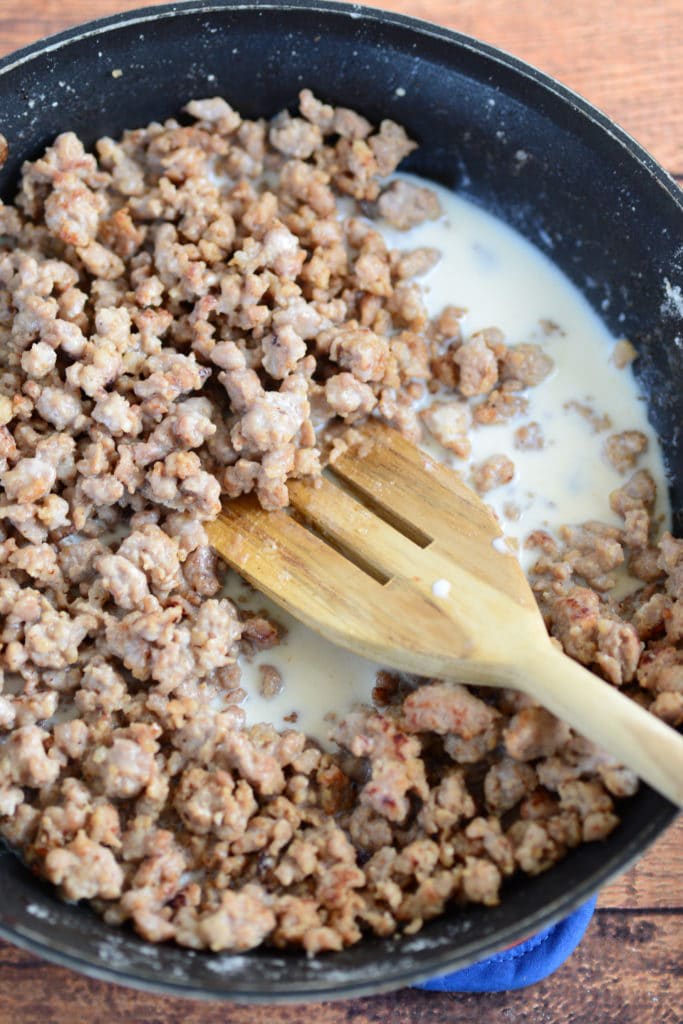 Pour your milk in a cup at a time, bringing to a boil in between each cup of milk.

Tip: if you want a bit thicker sauce, remove from heat and let stand for 3-5 minutes. If you want a runny sauce add ¼ to ½ C additional milk, bring to a bubble and plate. 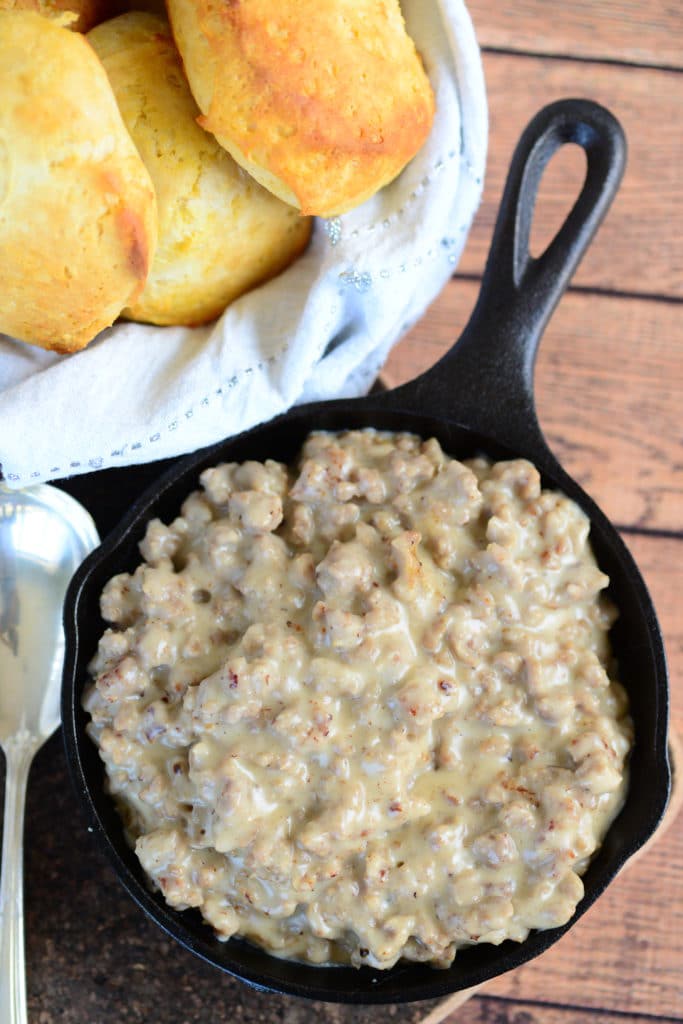 Sprinkle with salt and pepper. I prefer to go heavy on the pepper, it’s up to you and your families taste buds! 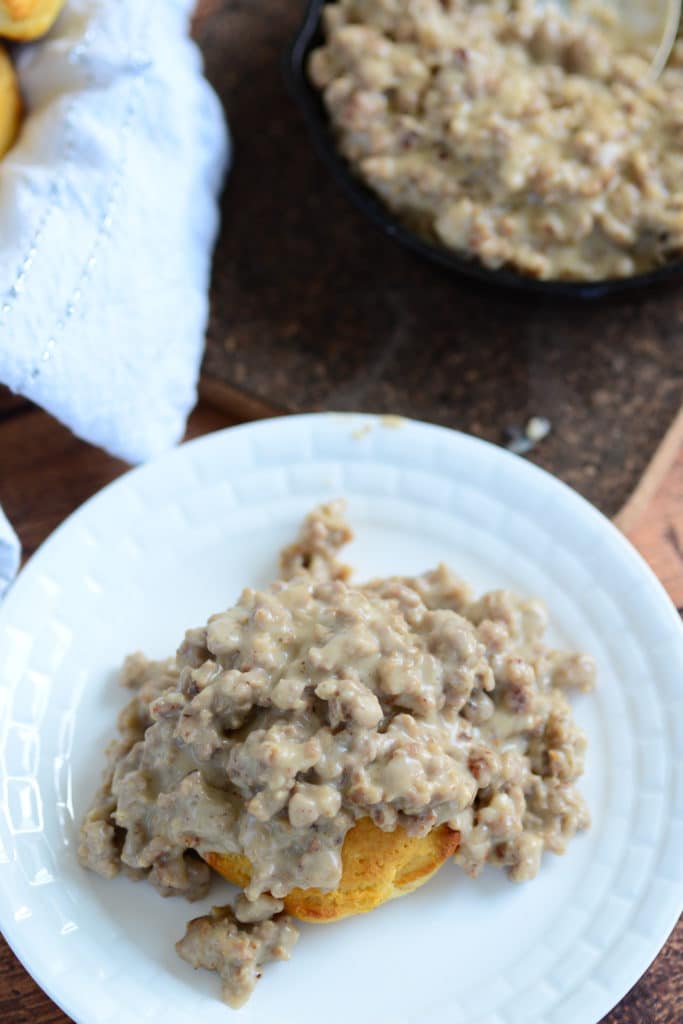 Now I like to split open a homemade biscuit, the hubs likes to have a whole biscuit…it’s whatever you feel like! Pour a couple of tablespoons over the top and enjoy!

Mix N Chop – one of my favorite kitchen utensils and it’s cheap! It breaks down ground meat wonderfully, shreds chicken and pork, mashes potatoes, the list goes on!

Try one of my other Breakfast Recipes 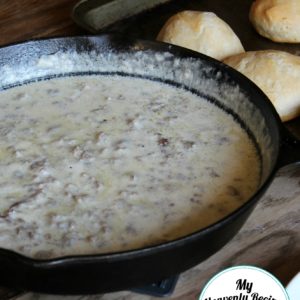 For a thicker sauce, use less milk. For a runnier sauce, add more milk. The sauce will begin to thicken once milk has came to a boil and removed from heat. Weight Watchers FreeStyle Plan:  12 SmartPoints for 1 biscuit and ½ cup gravy