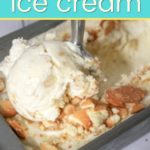 This Homemade Banana Ice Cream is so easy to make, you’ll wonder why you haven’t made it before. There’s no special ice cream maker needed, no fancy ingredients, and it’s made in literally just minutes. The hardest part of this recipe is waiting for it to freeze! 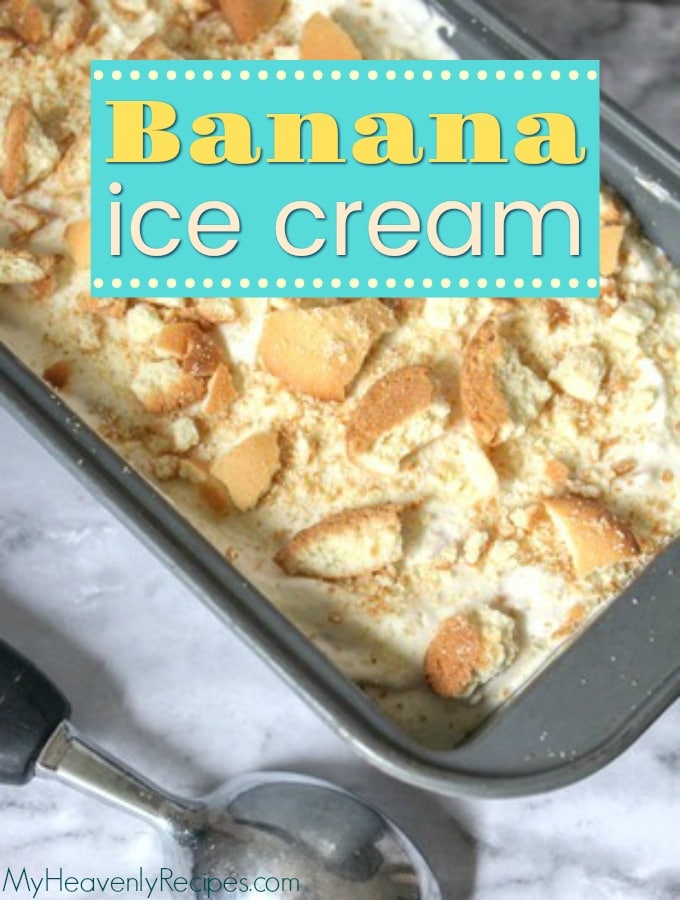 Summer is fast approaching (just 38 days to go… not that I’m counting or anything…), and you know what that means: ICE CREAM!

I don’t know about you, but I love making ice cream at home. Sure, it’s convenient to buy it at the store and it’s always fun to visit the local ice cream shops (I’ve been a big Graeter’s fan since childhood!), but there’s just something about homemade ice cream that I adore.

Plus, the kids love it too! They can’t resist checking on it about 50 times before it’s ready. I think they think it’s going to magically freeze faster if they keep opening the freezer. 😉

To make homemade ice cream, you do not need an expensive or fancy ice cream maker. You really just need whipped heavy whipping cream folded into evaporated milk which is then mixed in with your other ingredients and put in the freezer for a few hours. (At least six hours, but I prefer overnight.)

That’s the method I followed for my Super Simple Cookies And Cream Ice Cream + Video and that’s what I’ve done for this Homemade Banana Ice Cream recipe. You can use the whipped heavy whipping cream + evaporated milk base for just about any ice cream recipe you want. It’s seriously SO easy!

To make this EASY banana ice cream, you’ll need just a few ingredients that you may already have in your pantry. 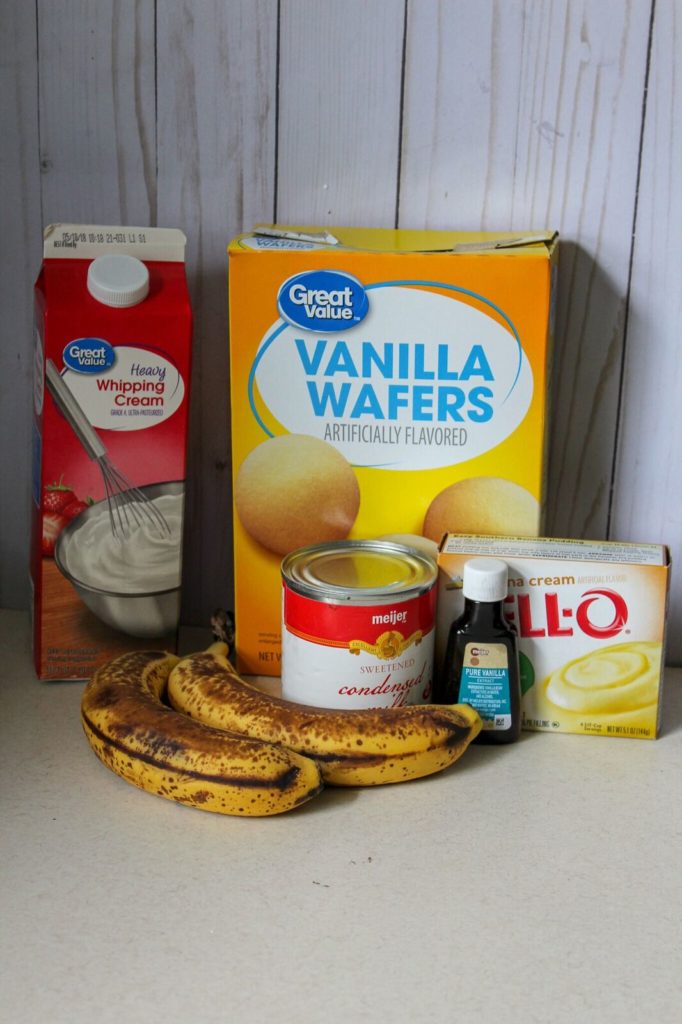 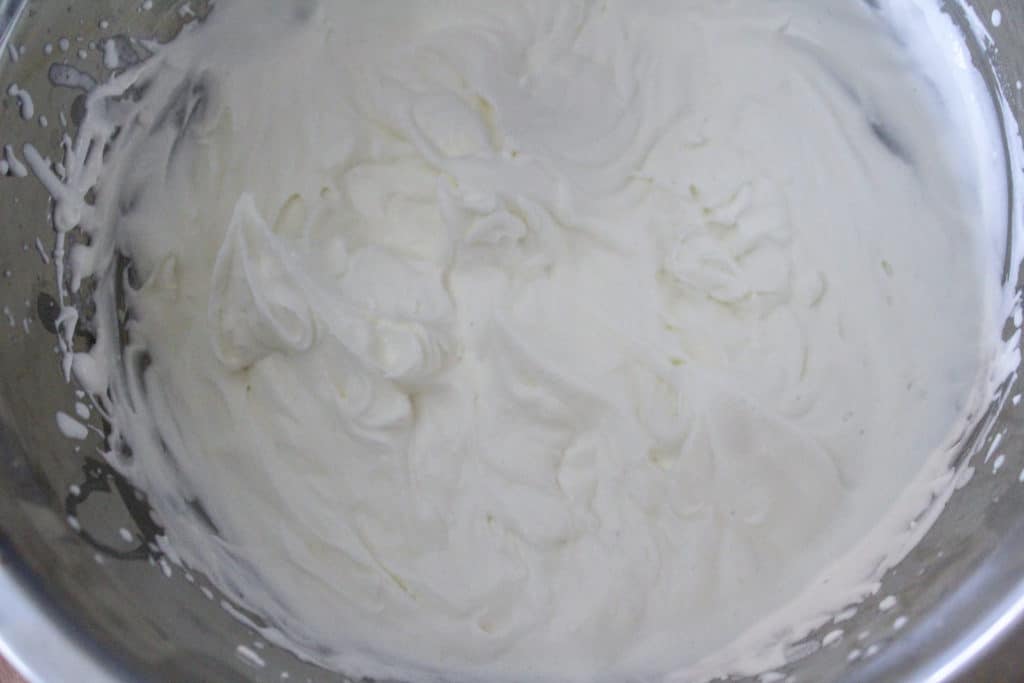 Step #1: In a bowl, whip the heavy whipping cream until soft peaks form. 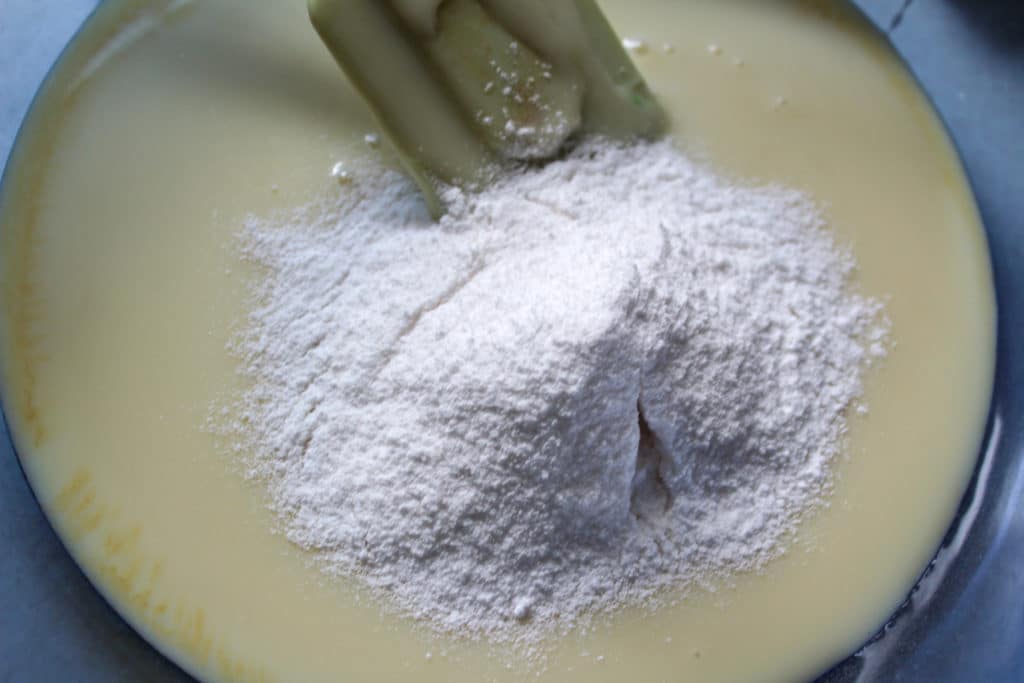 Step #2: In a second bowl, combine the evaporated milk and instant banana pudding. 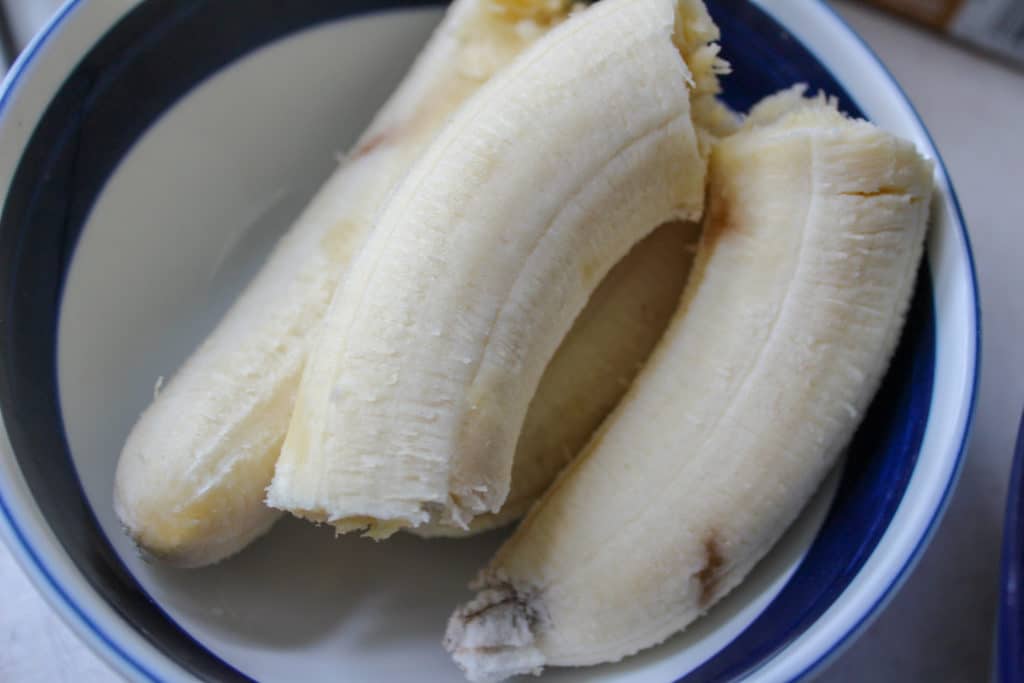 Step #3: Mash 2 bananas and add to the evaporated milk combination.  Stir until incorporated. 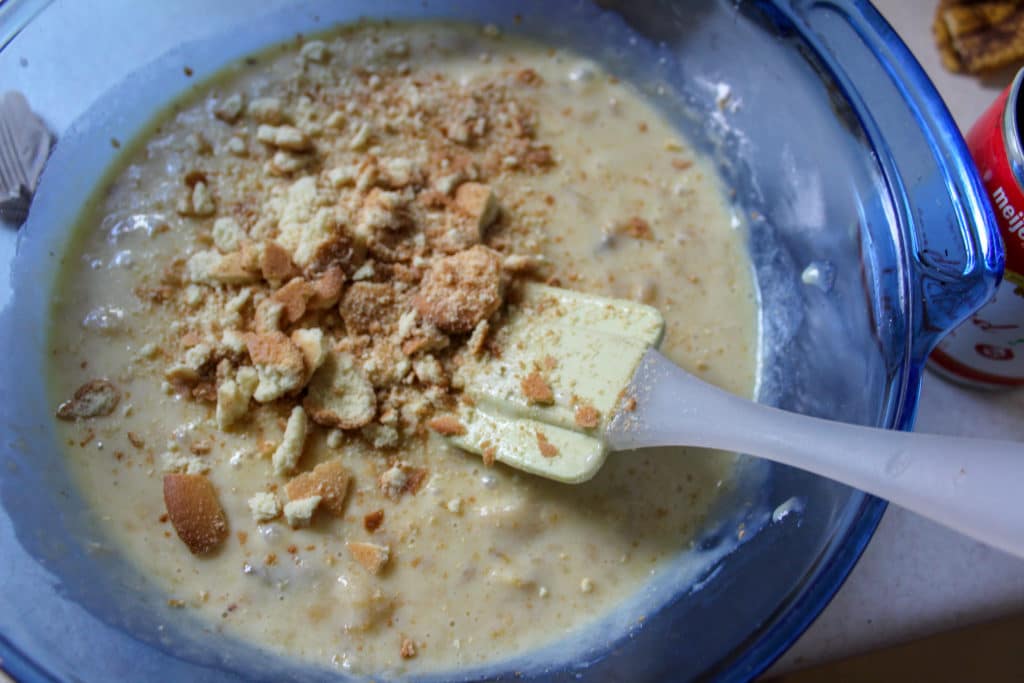 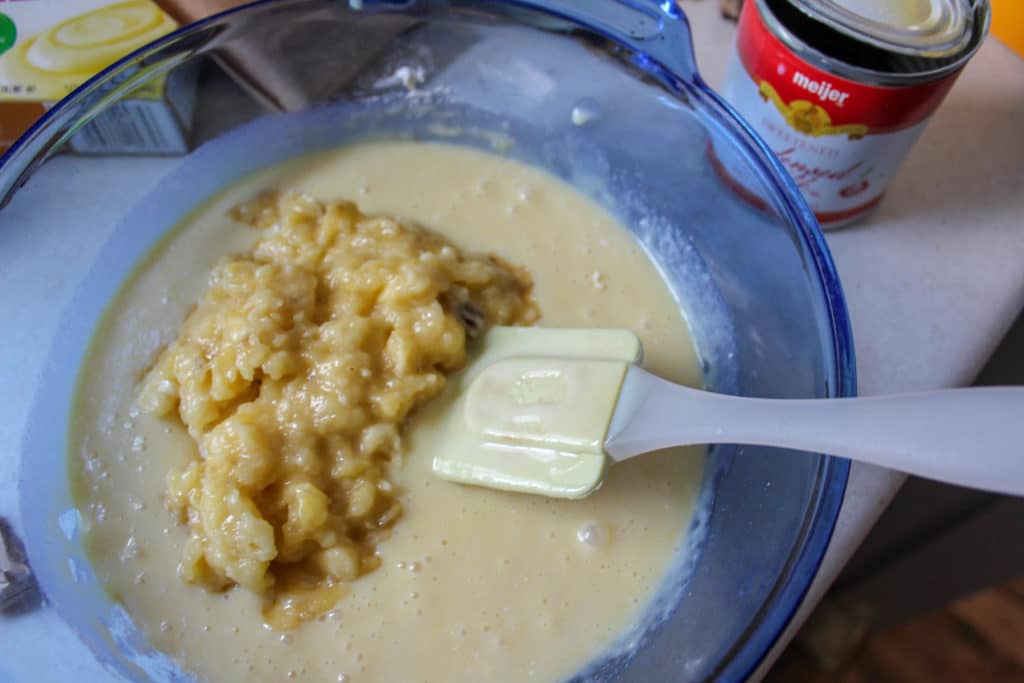 Step #5: Fold the banana mixture into the whipping cream. 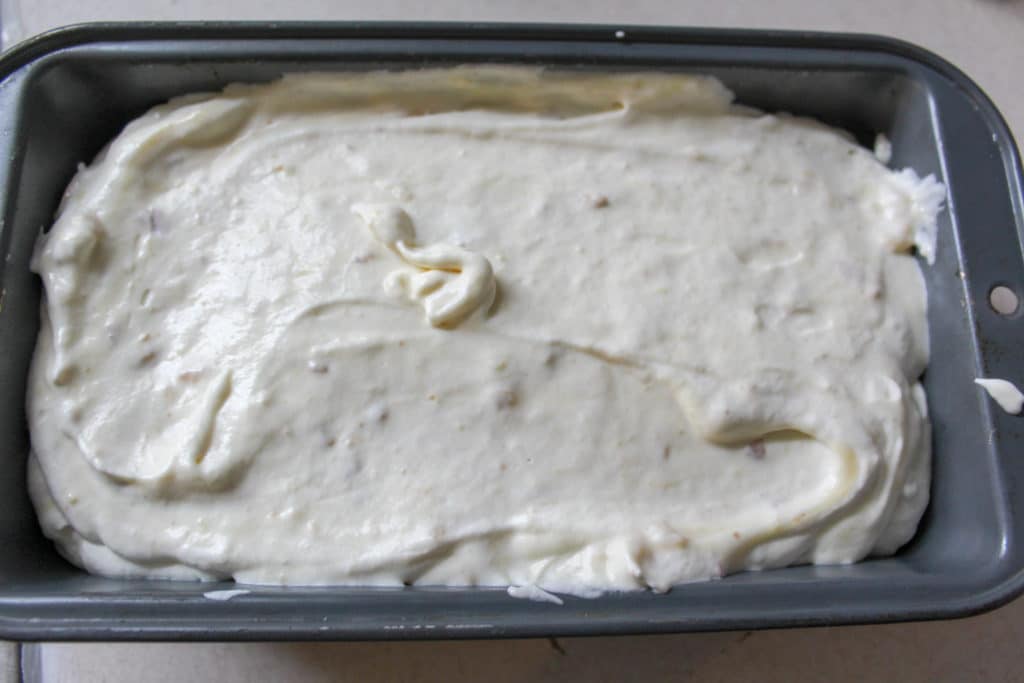 TIP: This metal loaf pan and ice cream scoop will come in handy for this recipe! 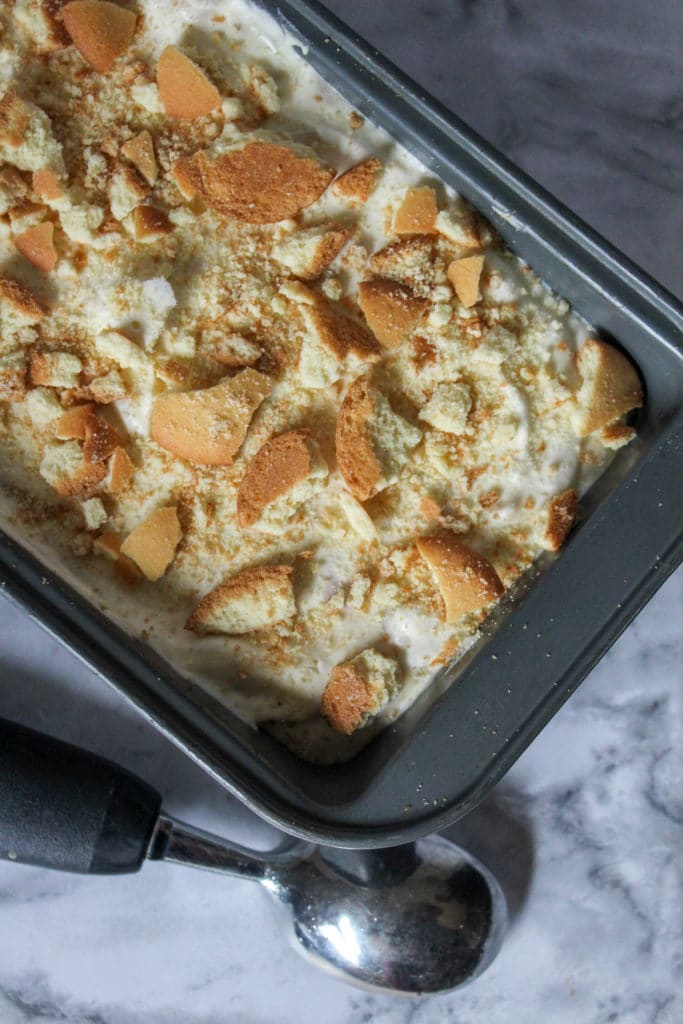 TIP: Homemade Banana Ice Cream is also super yummy with a few chocolate chips added in! You could also top it with my Homemade Whipped Cream Recipe.

I hope you and your family enjoy this awesome Homemade Banana Ice Cream recipe! 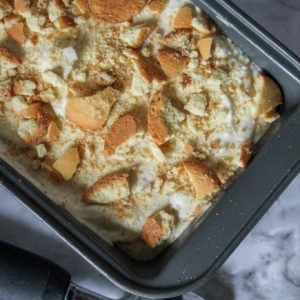 This is also super yummy with a few chocolate chips added in!